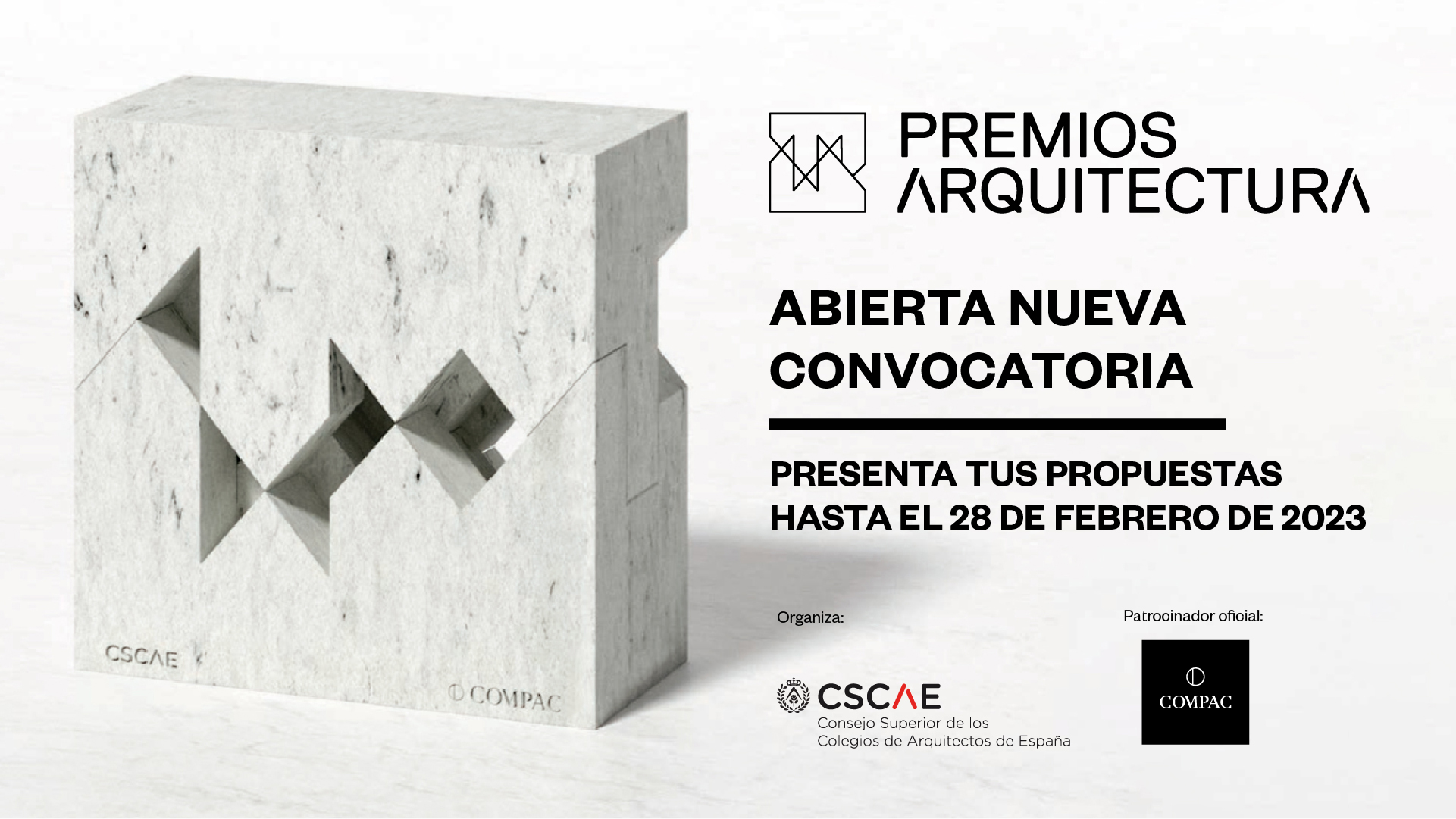 Organized by the Consejo Superior de los Colegios de Arquitectos de España (CSCAE), this year’s edition reformulates the Commitment Award to distinguish works of architectural dissemination and diffusion, innovation and entrepreneurship, as well as other ways of practicing the profession.

COMPAC reaffirms, once again, its commitment to the architecture sector by sponsoring the second edition of Premios ARQUITECTURA.

The deadline for submissions is Tuesday, February 28, and all works completed between January 1 and December 31, 2022 will be eligible.

In total, six distinctions will be awarded based on universal, cultural, artistic, professional and ethical values and three special recognitions: the Spanish Architecture Award, the Spanish Urbanism Award and the Permanence Award.

Due to the great success of the first edition of the Architecture Awards, organized by the Consejo Superior de los Colegios de Arquitectos de España (CSCAE), and sponsored by our company, this year we have joined again this initiative that awards the values of architecture to continue supporting closely the architecture sector and its ability to respond through design, creativity and technique.

The Premios Arquitectura are the result of the 180º turn that the CSCAE gave, in 2021, to the set of awards it had been granting since 1981. The first edition of these awards was a success, 650 proposals were submitted, reflecting the good health of our architecture and the quality of the work done by professionals in the sector, who contribute every day to create a better society.

The president of the CSCAE, Marta Vall-llossera, expresses her satisfaction at the launch of this new edition of the Premios ARQUITECTURA: « We are immersed in a change of era, a consequence of globalization, the irruption of the Internet and the development of new technologies, the climatic emergency and the depletion of non-renewable natural resources, as well as the change of homes and the progressive aging of the population and, as a result of all this, we see how our urban environments and the spaces we live in no longer respond optimally to our needs. In this context, the Premios ARQUITECTURA make visible the social value of an architecture that is at the service of people’s well-being and the preservation of the environment with solutions that combine innovation, efficiency and good design« .

COMPAC has once again joined the awards to continue to closely support the architecture sector and its ability to respond to current needs through design, creativity and technique. In this sense, Paco Sanchis, CEO COMPAC, highlights: « Architecture is the sum of art and technique at the service of the creation or transformation of our habitat. At a time of profound changes like the present, it is key to support and recognize the work of professionals who give life to spaces in an innovative, sustainable and committed way. The sponsorship of these awards is a natural consequence of COMPAC’s intense R+D work to provide architects with materials that allow them to design freely, without technical or creative limitations« .

This edition reformulates the Commitment Award to distinguish works of architectural dissemination and diffusion, innovation and entrepreneurship, as well as other ways of practicing the profession. The Sustainability and Health Award (universal values), the New Bauhaus Award (cultural and artistic values), the Habitat Award (basic values of Architecture and Urbanism), the Re a la rehabilitación Award (values associated with rehabilitation, renovation and regeneration) and the Profession Award (professional and ethical values) will also be awarded.

In addition to these six awards, based on values, there will be three special distinctions: the Spanish Architecture Award, the Spanish Urbanism Award and the Permanence Award, designed to recognize those works that stand out for their correct aging as well as for their validity and timeliness, as intrinsic values of Architecture and Urbanism.

Together with the Premios ARQUITECTURA, the prestigious Gold Medal of Architecture will once again be awarded to those persons and institutions that, in their careers, have best contributed to extolling and ennobling architectural work.

Thus, our company strengthens its ties of collaboration and commitment together, as an official sponsor and also as active participants in the development of talent. COMPAC consolidates its position as a benchmark in the field of architecture and urban planning, both nationally and internationally.